Attack on Titan Final Season isn’t quite over yet. The last season of the anime is getting a part 2, and it’s set to arrive 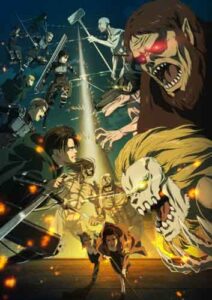 this winter. Studio MAPPA announced that the Final Season would continue on Sunday, just after part one’s final episode aired.

The announcement came with a brief trailer for the season’s next episode, but, for obvious spoiler-related reasons, it doesn’t give much away about the show’s last few episodes.

Now that Part 1 of Season 4 has wrapped up with episode 16 “Above and Below,” fans are once again left with a long wait for Part 2, which has left some fans with a plethora of questions and theories. The second half of the final season will pick up with episode 17, “Judgement” in the winter of 2021. No exact date has been confirmed as of yet.

In the meantime, you can stream all subbed and dubbed episodes on Crunchyroll, Funimation, and Hulu, or visit our reviews down below for the occasional refresher.

For its part, the Attack on Titan manga is set to publish its final issue in April. And now that we know there’s more to come for the anime, fans should expect the series to follow roughly the same storyline that the manga concludes with.

Creator Hajime Isayama still had not quite finished the Attack On Titan manga’s ending by the time Attack On Titan Episode 75 was released on March 28, 2021. In fact, the crazy part is that the manga’s final chapter will release several weeks after the anime’s “final episode”.

According to MAPPA, Attack on Titan Final Season part 2 is set to debut in winter 2021. The season’s first part included 16 episodes, but the studio hasn’t announced how many episodes will be in part 2.

Previous Top 5 roles by Hanae Natsuki
Next Will There Be A Season 2 Of Jujutsu Kaisen?

All right reserved to cloogh website 2023
© Copyright 2023, All Rights Reserved
We use cookies to ensure you get the best experience on our website. If you continue to use this site we will assume that you are happy with it.OkNoPrivacy Policy