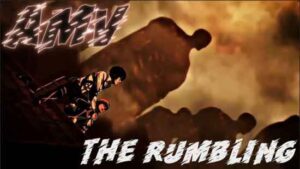 In this article, I will present an edit or AMV for the famous Attack On Titan Event ” The Rumbling “.

One of the most significant events in Attack on Titan is the Rumbling. The Rumbling is a fail-safe King Karl Fritz created to keep the Marleyans attacking Paradis Island. Hundreds of years later, Eren uses the rumbling to save the people of Paradis Island from enemies outside their island.

With the full power of the Founding Titan, Eren telepathically declared his will to all Subjects of Ymir that he had unleashed the Wall Titans upon the world to crush all life beyond Paradis Island. Eren then led the Colossus Titans on a southward march, unhindered by the Marleyan and Eldian soldiers preoccupied with Zeke‘s Titans throughout the city.